American Idol finally revealed its Top 24 yesterday... except, wowza!, it's actually going to be a Top 25! But who is Lucky Guy #13? 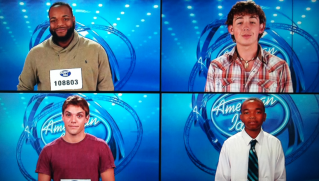 I find myself confused about whether I'm actually a big Johnny fan, or if I'm just so bewildered about his sudden, unexplained departure on the show that I'm finding myself obsessing over him like an unsolved mystery.

Through the process of elimination, I've decided this last spot has to go to Johnny. Nothing against Jermaine Jones, but I just don't see anyone other than his momma getting that excited about him making a surprise return (although I'd rather have him in the competition than say, Eben Franckewitz). Cowboy Guy is thrown into the mix just to piss us all off. It has to be between Johnny and David Leathers Jr., who isn't exactly my cup of tea but seems to be an early fan favorite and was the last contestant eliminated.

What, you think it's unfair if Johnny gets a free pass into the live shows without making it all the way through the Vegas rounds? Right, because these reality shows (and, well, reality) are always all about fairness. This is the only explanation for his sudden elimination after the constant replaying of J-Lo telling him, "you know you're gonna be a star, right?!"

I usually avoid American Idol spoilers like the plague, but if this result is leaked, I don't think I'll be able to resist this time. I NEED TO KNOW.

Speaking of mysteries... why has the show been hiding the return of Hollie Cavanagh from us? They smothered us with talk of other contestants returning (Colton Dixon, Aaron Marcellus, Baylie Brown) but there isn't a single mention of Hollie Cavanagh till the very end of last night's show?