I'm going to save the Jermaine Jones discussion for another day, as performance nights should be dedicated to the performers (plus, the whole "drama" just kind of disgusts me). Will we even have an elimination tonight? Should Jeremy have been allowed to sing again this week? Did you wish, as I did, that more contestants sang songs that were actually from the year they were born, not songs that were covered in the year they were born? And HOW AWESOME was J-Lo last night??? That's not sarcasm. I seriously loved her. 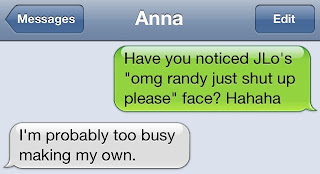 COULD BE IN TROUBLE


MENTOR GRADE
Will.i.am got off to a good start but ended up as comic relief. I give him a C.

JUST BECAUSE IT NEEDED SHARING
"I bet the people who made Watson could make a Randy Jackson robot. That robot would be much more entertaining because at least when he says the same thing over and over again it would be in a robot voice." -- Anna

WHO SHOULD BE GOING HOME
Shannon Magrane

WHO WILL BE GOING HOME
My best guess for the Bottom 3 is Erika, Deandre and Heejun, with EVP taking the fall (if anyone goes home at all). Hey, I'm a poet and I didn't know it!
Newer Post Older Post Home