Sigh. Last week was hard, this week was harder, and it's just going to get worse. Because it keeps getting better. Do you follow me?  But seriously- is there any doubt that all seven of these contestants will receive record deals? Will Uncle Nigel be able to top this season next year? And hey- the girls are surviving! 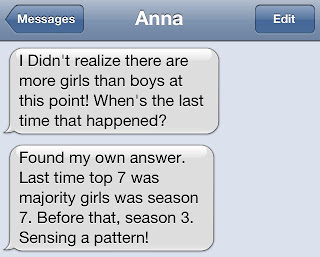 Now on to the performances, again from my least to most favorite of the night.

Hollie Cavanagh ("Perfect")
Oh, Hollie. The thing is, she is good- most seasons she probably would have been one of the standout performances- but unfortunately, everyone else is just ridiculously amazing this year. Hollie's problem is that she tries too hard, every note is so calculated, and it's all over her face. She isn't able to lose herself in a song like the rest of this group does, and that's why she will certainly find herself in the bottom once again.

Colton Dixon ("Love the Way You Lie")
Colton at the piano = automatic swoon. Having said that, I'm ready for Colton to shake things up a bit. He's getting a little predictable (predictably great, but predictable nonetheless) and it's time for him to surprise us.

Phillip Phillip ("Give a Little More")
Gasp! Was that criticism from the judges!? Like I just said about Colton, it might be time for Phillip to... give a little more. See what I did there?

Elise Testone ("You and I")
Hey, remember when Haley sang this last year before anyone (except, apparently, Jimmy) had ever heard it? Haley's version is still hands-down the best rendition of this song- yes, better than Gaga- but I enjoyed Elise on this tune as well. Mostly though I'm still annoyed that the judges couldn't give Haley her due credit on this song last year (remind yourself of her greatness here).

Skylar Laine ("Didn't You Know How Much I Loved You")
Randy Jackson said that Skylar is "definitely back." And that he felt her for the first time in "a long time." WTF RANDY JACKSON? I HAVE JUST ABOUT HAD IT WITH YOU! Have you already forgotten her performance of "Wind Beneath My Wings" last week that you gave her a standing ovation for? OMG. I can't handle it. About her performance though- I, like Jimmy, was worried a Kellie Pickler song wouldn't be big enough for Skylar, but we needn't have worried. I have never heard Kellie's version, but there's no way it could be anywhere near as good as Skylar's.

Jessica Sanchez ("Stuttering")
Sigh. It's just not fair how good she is at freaking 16 years old. I don't know if I was that good at anything at 16 years old. Not even math. She didn't waver one bit when she nearly fell off the piano at the end of the song (and with a smile, at that). Akon's right that she could use a few burgers, though. That's my constructive criticism for Jessica Sanchez. And maybe Colton could go with her for those burgers.

Joshua Ledet ("Runaway Baby")
I loved this. Was it Joshua's most technically perfect performance? No. But did I enjoy the heck out of it? Yes, yes I did. This performance finally convinced me that Joshua is ready for contemporary radio. More of this please!


WHO SHOULD GO HOME
Hollie :(

WHO WILL GO HOME
Hollie :( But she won't be sad for soon. I'm sure Disney will come knocking down her door ASAP. She definitely has the look and can even sing circles around Miley, Demi and Selena. And I can't even begin to imagine who might be in the bottom with her... maybe Colton and Elise? If Ryan Seacrest's little card should end up having any name other than Hollie Cavanagh on it, count on the judges to finally use their big save this week.
Newer Post Older Post Home