The first live show is finally upon us! It was filled with useless banter and irresponsible praise from the judges (not that we expected anything more) but the show itself was actually pretty great, with a couple of exceptions.

First, say hi to my dear friend Anna who will be making appearances on my AI posts. Our Idol journey together began from almost the very beginning, during the tail end of the first season in the fall of 2002. We even road tripped to Cleveland to see the first American Idol Live Tour (we got lost and missed half the show). Who knew that after fate brought us together as college roommates, we'd still be sharing notes on this show?

But I digress. Let's start with the duds.

BATTLE FOR THE BIEBER VOTE 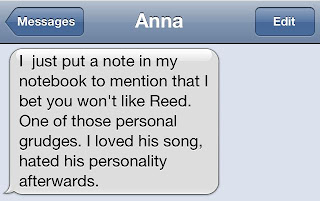 MY GUESS FOR AMERICA'S TOP 5