It's been a long two weeks without So You Think You Can Dance. I'm still perplexed as to exactly how the eliminations are going to work- contestants will be eliminated at the beginning of the following week? But how many will dance for their lives? Did I miss that? I know that Cat explained it for us at the beginning, but my brain wasn't ready to really listen yet and I couldn't be bothered to rewind just for that. In any case... I'll start with my brief thoughts on each routine before ranking everybody, as they are being voted on individually, not in pairs, with gender parity (I did catch that!).

Witney & Chehon - Samba (Louis Van Amstel)
Chehon's technique may not have been perfect, but I doubt anyone will care. Leading off on a two-hour show could spell danger for some dancers, but that is exactly why Witney and Chehon were put in this spot. This extremely talented, likeable couple with funny-spelled names will definitely be safe.

Tiffany & George - Contemporary (Sonya Tayeh)
This was a beautiful routine by two lovely dancers, but they have a couple things going against them that could spell doom. The early slot and slow tempo- without any big, standout moments- may cause them to be overlooked or forgotten completely by voters. However, if they end up dancing for their lives, depending of course on who else joins them, I would think the judges would be inclined to keep both of them around a little longer.

Janaya & Brandon - Hip-Hop (Tabitha & Napoleon)
Nappy Tabs seemed to take it a little easy on these two, and Janaya's dancing was a little too pretty and delicate to really sell herself as a serious hip-hop dancer. They haven't benefited from a whole lot of air time up to this point- especially Janaya- which may hurt them in the first week of voting.

Alexa & Daniel - Jazz (Sean Cheesman)
Between the bright red outfits and The X-Factor spots showing the "mean" side of Britney (Bad to the bone? Really? You tell them, Brit Brit!), I was half-expecting them to dance to "Oops I Did it Again." And where was Alexa's bright red lipstick? She was barely recognizable without the crazy curly hair and bright red lips. Jokes aside, Alexa and Daniel showed some serious athleticism in this routine, but didn't quite bring in the personality they both showed in their video intros.

Amber & Nick - Vietnamese Waltz (Jason Gilkison)
I was a little shocked at the way Jason barked at Nick- he always seemed so nice as judge!- but it seems he was able to get through to him. Still, Nick is my early least-favorite contestant on this show. Amber moved beautifully in that gorgeous dress, but I still can't shake the baditude she showed in her first go-around with the show. I really enjoyed the dream-like choreography, and while I haven't done any scientific research on the issue, memory tells me that the Vietnamese Waltz rarely is a hit with viewers- so they could be in trouble.

Amelia & Will - Hip-Hop (Tabitha & Napoleon)
Now this is more like the Nappy Tabs we know and love! Both of these dancers really express their personalities well on stage and have both shot way up on my rankings. Will showed us last week that he may not have the incredible physique of the other male dancers, but he has proven to be kind of a giant, endearing dork, and there's no better to describe Amelia than how Mary did: she's a quirky little vixen. I enjoy these two. They'll gets lots of votes.

Janelle & Dareian - African Jazz (Sean Cheesman)
Dareian definitely does an impressive Donald Duck, if this whole dancing thing doesn't work out for him (but I think it might). I think he'd be a shoo-in to play Jacob in Twilight: The Musical. Janelle continues to impress- I wondered if the belly dancer would really have the technique to master other styles of dance, but she has shown no reason not to believe she can do it.

Eliana & Cyrus - Broadway (Tyce Diorio)
The idea of Cyrus dancing to a song from Hairspray did get a little chuckle out of me, but his performance was definitely nothing to laugh at. As Mary said, CYRUS, PEOPLE ARE GOING TO GOOGLE YOU UP! If this was to be based on votes alone through the whole season, Cyrus' personality would carry him past better dancers all the way through to the finish. And I know I'm not the first person to say this, but Eliana might just be the girl to beat in this competition.

Audrey & Matthew - Contemporary (Travis Wall)
Travis Wall's Titanic-inspired number was just stunning (and Matthew was a suitable replacement for young Leo). Audrey's jump off of the chaise lounge wasn't quite the breathtaking moment that Melanie leaping into Neil's arms (sigh) was last year, but it was still a moment. Just a side note: I don't know what this says about me, but whenever I hear "Unchained Melody" I can't help but think hey, that's Simon Cowell's favorite song. Anyone else? No?

Lindsay & Cole - Paso Doble (Jason Gilkison)
Hmmm... so all three ballroom dancers were given ballroom styles. Coincidence? Conspiracy theories aside, of all the ballroom styles, the paso doble really seemed like a great fit for Cole in theory- being a ninja and fighting bulls are almost like the same thing- and he absolutely would have knocked my socks off had I been wearing socks (it's finally summer in Seattle!). With the way Cole commanded attention, I honestly barely noticed Lindsay- and it's rare for the girl to be overshadowed in ballroom numbers, isn't it? 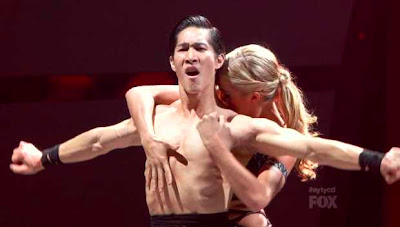