I LOVED that opening number, if only to see Nigel "The Animator" Lythgoe in a little dance cameo. I wish they had worked Cat Deeley in too. And Adam Shankman! I like Wayne Brady, but they really could have used a little Shankman in that performance.

Mariah & Carlos - Jive (Jason Gilkison)
My early favorites are partners! But, I am worried. The combination of going first and a good-but-not-great performance make me really worry that these two are going to be absolutely wasted. A bottom-three appearance for both already seems inevitable. They deserve better!

Jasmine M. & Alan - Contemporary (Travis Wall)
Absolutely beautiful. But they had to have been able to see through those blindfolds just a little bit, right?! The chemistry was 100% believable. Alan's stock (aka place in my rankings) should be going up at the end of this night.

Malece & Jade - Jazz (Travis Wall)
I totally expected this pairing, with Jade being vertically challenged and all. I kept waiting for a "WOW!" moment and never got it, but love the confidence Jade has (and his facial expressions! the best!) and I can't say anything bad about Malece. I wonder if voters will find them interesting enough?

Jenna & Tucker - Broadway (Tyce Diorio)
I know we aren't voting for couples, but I love these two dancing together. This was a fun, cute piece, but I can't wait to see them do some REAL dancing. That sounds like I'm dissing Broadway and/or Tyce, but I swear I'm not. Well, maybe a little. Couldn't he have given them something a little more challenging, something splashier, something that would really make them stand out above the rest of the pack?? I just want to see them do something special, and I worry they will accidentally end up in the bottom. That might make me scream.

Brittany & BluPrint - African Jazz (Sean Cheesman)
This was so much than I expected it to be, like, SO MUCH better. BluPrint, specifically. Really impressed. I was wrong to rank Jade ahead of him last week. I feel like Brittany could be this year's Tiffany (and I mean that mostly in the sense that she's great and people seem to love her but she doesn't really do anything for me personally).

Alexis & Nico - Hip-hop (Christopher Scott)
The judges- as they usually are- were right on with their gentle criticism. If they get voted through to next week, I have a feeling they will learn from this and really improve, but they might be out of luck. Sidenote: I used to find Christopher Scott a little creepy, but now I'm thinking maybe he was just really uncomfortable and nervous before? He is much more charming on screen these days.

Makenzie & Paul - Viennese Waltz (Jason Gilkison)
I'll admit it: I love that Avril song, "I'm With You." And it's beside the point, but I didn't like the arrangement. The dancing, though, was romantic and gorgeous, but I'm not convinced it's the kind of dance people rally for on the phones. It would be a shame, though, to see either of them land in the bottom six.

Jasmine H. & Aaron - Jazz (Sonya Tayeh)
First of all, I meant to say this last week, Aaron looks exactly like Bobby Cannavale. Also, Wayne Brady (my brain keeps wanting to call him Bruce Wayne, which is weird) gave his best critique of the night here, between trying not to sound like a dirty old man (right, Uncle Nigel?) and his Lil' C impression. Jasmine's legs are just ridiculous and Aaron looks committed and ready to take full advantage of his second-chance opportunity at the Top 20.

Hayley & Curtis - Hip-hop (Christopher Scott)
It's funny how much an outfit can do for someone- Curtis didn't look like a little kid anymore. The two dorky dancers really pulled off the sexy choreography and were one of the bigger surprises of the night. Here's another Christopher Scott sidenote: did you know he choreographed the Microsoft Surface advertisements? Twitch and Alison are in the newest ad too. I learned this during the pre-previews for Monster's University.

Amy & Fik-Shun - Contemporary (Sonya Tayeh)
This was great, but one thing that really bothers me: why is Nigel labeling Amy "the beast" already? Over the Jasmines or Mariah or Jenna? I don't like them forcing us to love her and it makes me feel rebellious. 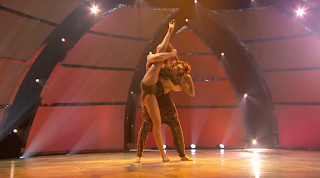 The Girls:
The Boys:

Who Should Go Home:
I'm operating under the belief that just one girl and one guy will be sent home next week, but I just realized that two girls and two guys were eliminated after the first week last year. That's not true again this year is it? I believe the bottom six will include Mariah, Malece, Alexis, Nico, Paul and Carlos. Alexis and Nico will be packing their bags.
Newer Post Older Post Home