SO MUCH INFORMATION before the competition starts! So I'm being a little dramatic, but first, it's unfortunate that Jade suffered an injury that forces him to leave the show, but more unfortunate that it didn't happen a week earlier and possibly spare Carlos. (What?) Second, I love that Nigel listened to everybody who was unhappy with the format and was brave enough to accept the feedback and make a change! You can thank the social media era for that. And third... Paula Abdul! I am actually looking forward to her delightful babbling. But Erin Andrews? We'll see. I'll reserve judgment for now.

Seriously though, I am really glad they moved the eliminations to the end, but- HOW... what!? I cannot believe Jasmine Mason is in the bottom three. Jenna doesn't deserve it, but doesn't surprise me as much since she hasn't been given much of an opportunity to shine yet. It HAS to be Alexis. Blu-Print and Curtis luck out from Jade's injury, but I have to think he would have been asked to leave anyway.

Amy & Fik-Shun - Paso Doble (Jean-Marc Généreux)
So we finally see these two both out of their element. Fik-Shun had a little more trouble with the style than Amy, who apparently has no problems with anything ever at all. I keep waiting for her to slip up, since there are other dancers I like better than her for intangible reasons, but gosh dang she's good.

Jasmine H. & Aaron - Broadway (Spencer Liff)
I really don't have much else to add to what I said about this pair last week- they are ready for the big stage now. They just melt into the characters they are asked to play and have such incredible stage presence. Give them something super crazy hard already so we can give them a standing ovation!

Makenzie & Paul - Contemporary (Lindsay Nelko)
Wow. So you start with a story about a couple being torn apart by a terminal illness, pick an acoustic, emotion-driven song, and add in a flowy white dress... this pretty much guaranteed two things: tears from Mary Murphy and goosies (thanks again to J-Lo for giving me that term). This was a special performance, but I worry it'll get overlooked- especially with Makenzie already showing up in the bottom three once before. These two are really growing on me.

Jasmine M. & Alan - Jazz (Sean Cheesman)
I am liking Alan more and more every week. I agree that a little more quirk from the dancers would have been great, but Jasmine better be safe tonight and she better be safe next week. And Alan. Shoot, now I'm worried about Alan.

Jenna & Tucker - Hip-hop (Keoni & Mari Madrid)
Hmmm. This seemed more jazz than hip-hop to me? OK, so it wasn't just me. Hip-jazz! And Paula FTW- I loved her point that MJ often borrowed from the jazz world (since it was, after all, a MJ song). I think she's doing great as a judge on this show! In any case, I really feel like Jenna & Tucker keep drawing the short straw. Give them a chance!

Hayley & Curtis - Samba (Jean-Marc Généreux)
One pair has to be the weakest of the night, and this looks like it'll be the one. And it's mostly Curtis, who looks completely overwhelmed, which could be expected. He seemed hesitant and unsure of himself for the first time this season- and as I've been saying, both of these dancers just come across so young compared to some of the other acts. I'm curious how Hayley would do with another partner- one of the All-Stars, in particular- if she makes it to that point.

Alexis & Nico - Jazz (Spencer Liff)
I'll be honest, I was distracted during this performance (chatting with a BFF about vacation plans! can you blame me?), but I didn't feel like going back and watching it over. From what I saw, this might have been their best effort yet, but there is just something missing here from both dancers. They just don't seem to be at the same level as the others. I am giving up on guessing Nico to be the one to go home, though.

Mariah & BluPrint - Hip-hop (Luther Brown)
These two get paired up AND they get hip-hop?! Could they possibly get that lucky? Mariah definitely had a new life in her performance and I am so thrilled to see her have a great week. I knew I liked her! The judges' comments made it pretty clear that if BluPrint somehow ends up in the bottom again next week, he'll be going home.

The Elimination:
I'm a little dumbfounded that Jasmine Mason was sent home over Alexis. We just haven't seen that much out of Alexis, and Jasmine has been one of the top dancers each week. What am I missing?

And Erin Andrews wasn't bad. Not my favorite guest judge of all time or anything, but she held her own. 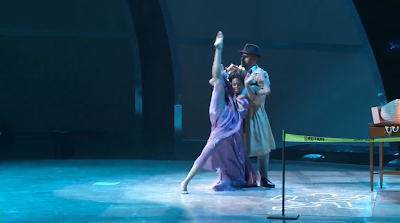 There wasn't a clear-cut winner this week, in my opinion, so I'll give the edge to my favorite pair: Jasmine and Aaron.

Who Should Go Home:
I haven't been doing too well this season! My guesses for next week's bottom six are: Hayley, Makenzie (over the over-hyped Malece), Alexis, Tucker, Curtis, and Alan (over BluPrint, who voters will rally for tonight). Alexis and Curtis will go home. Wow, really? I didn't know where I was going with this and I ended up picking Curtis. I seriously doubt Uncle Nigel will allow for two tappers to go home the same week, but I'll stick with it. However, if I'm wrong about BluPrint and he ends up in the bottom again, he's out for sure.
Newer Post Older Post Home