A few months ago, a guy who owns a comics and collectibles shop- knowing that I'm always looking for She-ra items- pulled out this costume and mask set. I didn't know anything about Ben Cooper costumes at the time, and honestly, the mask creeped me out a little. So I passed on it.

After that, I started noticing more of these Ben Cooper costumes on eBay and other blogs and forums I read. Curiosity caught up with me, and a quick search of the interwebs taught me that the company (started by a theater costume and set designer by the name of, yes, Ben Cooper) starting making Halloween costumes in the 1930's and lasted into the late 1980's. At a time when Halloween costumes were mostly traditional characters- ghosts, witches, and the like- the company was quick to acquire licenses from popular culture and produced costumes of the most popular movies and television shows at the time. Smart!

I decided if the costume was still there the next time I went back to this shop, I would have to buy it- and fortunately, it was still there waiting for me. The shop owner said he had no doubt I would change my mind and be back for it. Here she is, the Princess of Power in Ben Cooper costume form: 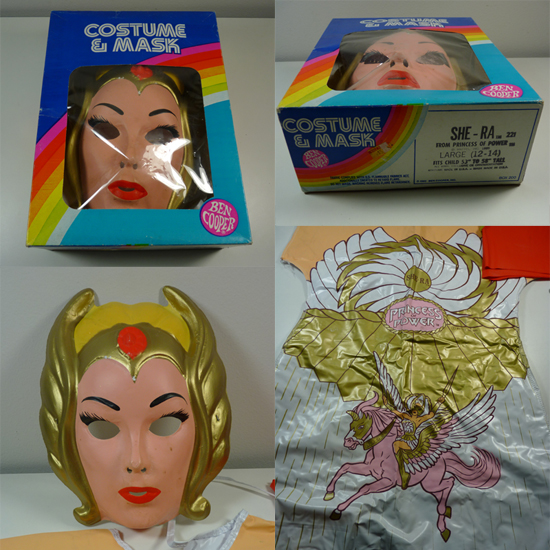 No collector can have just one of anything, so I went straight to eBay and found this My Little Pony costume. I still find the mask creepy, but I just love the look of the classic ponies of my childhood. All I need to find now is the Batgirl costume and mask set, and I'll be satisfied with my little Ben Cooper collection!
Newer Post Older Post Home