Another contestant was eliminated even with the Jermaine Jones disqualification, which means we are now down to our final 10 singers. And could there be a more deserving group? The bad news is I'm 0-for-2 in my American Idol pool, but the silver lining is that we are 2-for-2 in my American Idol heart. That made more sense in my head, but I think you know what I mean. 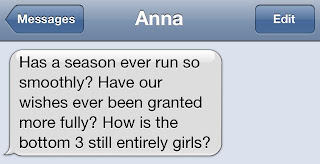 I'm not sure how Elise still managed to slip into the bottom three, but it appears that we might still be stuck on the same unfortunate trend (most of the girls getting the boot early) that we've been seeing the last few years. It's a good sign for Phillip and Colton, but I'd still be shocked if Uncle Nigel doesn't have a few tricks up his sleeve to help one of Jessica/Skylar/Hollie become our next champ.

And- double negative alert!- I can't not say it. Any one of these Top 10- you know what, I'll even include Shannon- any of these final 11 contestants are better singers than Demi Lovato. Right!?

Finally, I'll throw in my two cents on the Jermaine Jones incident. Conspiracy theorists believe that Uncle Nigel and co. were aware of his issues with the law the entire time, and with American Idol viewership being threatened for the first time, they decided to turn it into a dramatic storyline twist in an effort to boost ratings. I really don't want to believe it, but unfortunately I'm afraid the conspiracy theorists are right on this time. This isn't the first time something like this has come up (like Season 2's Corey Clark) so you'd have to assume they've stepped up their background researching to avoid more embarrassment. Plus, bringing Jermaine back as a "surprise" was just so inexplicable, it only makes too much sense to believe this disqualification was staged. I'd also guess they were hoping to delay this by another couple weeks, but with his close call last week and the emergence of his awful attitude, they had to speed it up or risk him being actually eliminated. Recording the conversation with Jermaine when he was told he was disqualified seemed particularly distasteful to me too. Why was that necessary? Why embarrass him more? I can't stand the guy, and I'm thrilled he's off the show, but I just don't care for how it all went down.

So that's that. Looking forward to this Top 10 singing some Billy Joel next week!
Newer Post Older Post Home